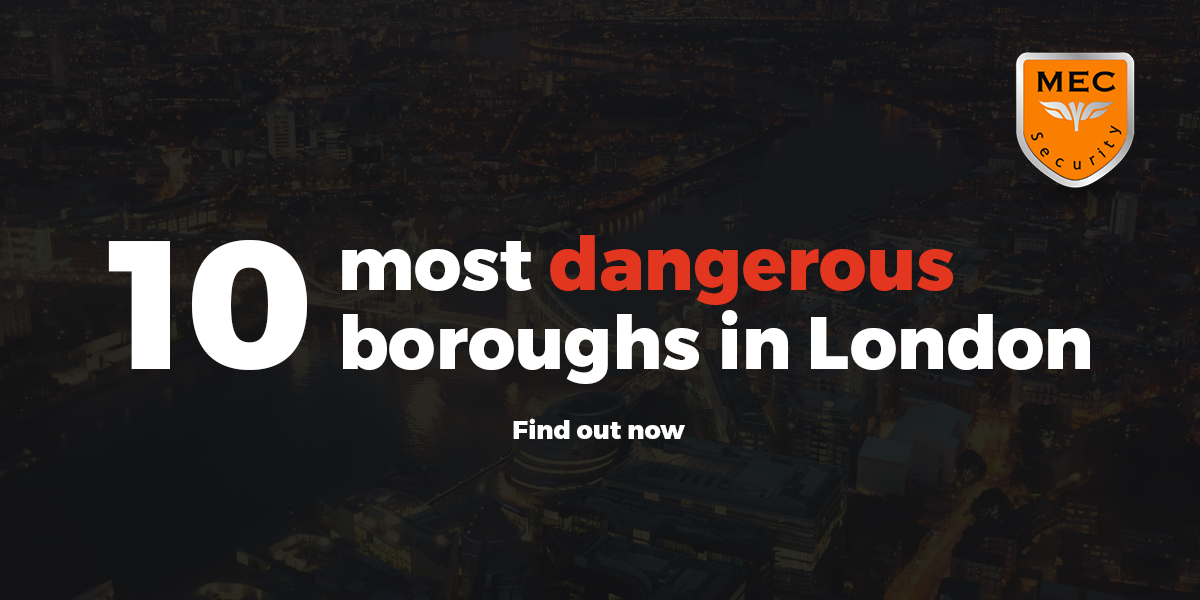 10 Most Dangerous Boroughs In London

“Is London dangerous?”
“How dangerous is London?”
“Is London a safe place to visit?”

These are common questions that anyone visiting London for the first time might have. Perhaps you’ve accepted a new job, or you want to visit London as a tourist, the many reports of street crime broadcast in the media can make you feel like London is unsafe. While there are many safe areas in London, there are also some more dangerous places where you could find yourself at higher risk of being a victim of crime. It is always a good idea to do some research into any city, or country that you plan to visit so you can familiarise yourself before you arrive.

If your destination falls in our list of the most dangerous places in London, then these are areas that we advise you to take due care and remain aware of your surroundings to prevent you from falling prey to criminals. It may seem that it is best to avoid these places, but this is not the case, we present this information to you to help you prepare for a worst-case scenario and recommend that you keep your wits about you!

Here, you will find out the frequent crimes that are commonplace within these London boroughs. With this knowledge, we hope that you can learn how best to avoid any troubles on your visit/stay! You can also take help from the best security company in UK.

Below is the list of the top 10 most dangerous areas in London as per reports and data:

Most Dangerous Parts of London

Westminster is one of the best tourist destinations in London. We are talking about the borough that houses Big Ben, Westminster Abbey, West End, Palace of Westminster, Buckingham Palace, Westminster Cathedral, and Oxford Street. However, London’s beating heart is one of the roughest areas of London when it comes to crime!

With a massive amount of tourists and an even larger working population, the area is known for high crimes in London, making it potentially dangerous for many reasons.

Westminster has led the list of most dangerous places in London for two consecutive years. As reported by the Metropolitan Police, from June 2017 to June 2018 Westminster was the worst borough in London. During that interval, a total of 14,351 acts of violence were recorded. Unfortunately, this trend has continued throughout 2019.

The reason for the high crimes in this particular area of London is difficult to determine. Data suggests that the causes could be as a result of expensive properties in the area and the consistently heavy foot traffic, among other things. Tourists and city workers prove to be a vulnerable mark for pickpockets and muggers in Westminster, with 37,315 of the 66,438 offences recorded as thefts.

Statistically, Westminster is one of the most dangerous places in London, but with all things considered, such as a high police presence and how busy it is, you should be relatively safe if you keep your wits about you!

A Blend Of Two Worlds

Fashioned initially from two Essex County districts named West Ham and East Ham, Newham is home to the Olympic Park as well as the London Stadium. The East End of London is notorious for its ties to the criminal world, which is why people still regard it as one most dangerous parts of the city. Due to the allure of the location and the massive amount of investment since London hosted the Olympics, luxury high rise apartments are just a stone’s throw away from neglected housing estates. This borough of London bares a stark contrast, from an air of affluence to evident lack of investment & poverty. The more impoverished areas are home to low-income, working-class households, with the attraction of gang culture and illicit cash, resulting in opportunistic and often violent crime.

Records have repeatedly placed Newham among the worst boroughs in London. In 2018, there was a whopping record of 38,995 crimes and 11,710 violence in Newham. With theft being the most rampant crime, there is a litany of homicides like shootings and stabbings. It is wise for a tourist to avoid housing estates and also to remain vigilant when visiting tourist attractions or shopping centres!

An Extension Of The Inner London

The borough of Camden stretches from inner London out to the Northeast. It is renowned for its trendiness, musical history and generally being a vibrant mix of cultures within the city. Some would regard Camden as one of the few remaining areas that genuinely represent London City and its varied populace. Frequented for a wide variety of reasons, from its embodiment of alternative culture to the numerous popular music venues. A few examples of places to visit are:

With the many positives, data suggests that Camden is the 3rd most dangerous area in London after Newham. 2018 recorded a sum of 38,944 offences with theft holding about half of the total. This district is typically safe except for petty crimes such as pickpocketing and mugging. It is difficult to pinpoint exact reasons or causes for the crime, but the reasonable assumptions would be due to the high amount of tourist foot traffic making for easy prey. Try to remain aware of your surroundings, beware of alleyways and keep an eye on your possessions; this should help you stay safe.

Southwark is located South of the River Thames and is a neighbouring district of Lambeth. The famous borough is home to the Shard, Globe Theater, the Imperial War Museum and the Tate Modern. However, many are unaware of how dangerous this London town is. According to statistics from 2018, there were a total of 38,559 crimes recorded in the Southwark, making the borough one of the most dangerous areas in London.

With towns like Peckham, Bermondsey, Camberwell that house low-income families on cramped, dilapidated housing estates, this is another area where gang culture is deep-rooted. As these areas are next to one of Europes largest business epicentres, the temptation for smalltime criminals is often too much to resist. In February 2019, London Bridge and West Bermondsey observed 355 crimes alone.

Much like the other areas on this list, Lambeth is home to some places are great for tourists to visit which offer an authentic London experience, for example:

Lambeth isn’t dissimilar to other dangerous areas in London. The average of the high crimes in this London town is in line with what you have grown to expect. Met Police data paints a picture of how dangerous the borough of Lambeth can be.

Brixton is an area in Lambeth that is responsible for approximately a third of the boroughs total crime, with the repeated issues relating to gang activity. Furthermore, Lambeth once held the highest number of drug possession cases among the London Boroughs. With a total of 37,976 crimes filed in the past year, you would do well to avoid venturing deep into the borough unless accompanied by a local that you trust.

The 1965 Merge Is Divided By Knife Crimes

In 1965, the combination of Stepney, Poplar and Bethnal Green birthed the London Borough of Tower Hamlets. This London borough has gradually become one of the most dangerous places in the city. With a growing knife crime problem throughout London, Tower Hamlets had knife crimes reported at an alarming frequency. Between November 2017 to November 2018, there were 11,512 violent crimes recorded. In total, there were 35,829 crimes in the area which ranks it as a dangerous area in London that is also on the rise. Violent crimes include:

From the formal air of Canary Wharf, the hipster capital Shoreditch and to the rich, but eerie, history of Whitechapel, many places are well worth visiting on your stay. As with any populated area, pickpockets are active, as are muggers and thieves, so keep an eye on your possessions. With regards to violent crime, keeping to yourself will usually result in your safety as it is the gangs situated in Bow, Bethnal Green, Poplar etc. that typically engage in these activities.

A City Sitting On The Fence & Low On Defense

Haringey is a district in North London that lies between Inner London and Outer London. The gangs in this London area is part of what makes it so dangerous. As a result of what is referred to as “postcode wars”, gangs in Tottenham and Wood Green have been at loggerheads for many years.

As far back as 2014, Haringey was regarded as the knife crime capital of London. It accumulated 33,476 crimes in the past year, with the vast majority committed by youths. However, this doesn’t make it the worst borough in London, but it is certainly one to be wary when visiting.

Perhaps, it being one of the poorer districts in London explains the rampant crime in the areas. Nonetheless, Haringey is not all bad, with some great places to visit, such as:

Slated as the ”gun crime capital of the UK”, Brent is northwest of Central London. Stonebridge and Church End in Brent is Yardie Gang turf, cementing Brent among the more dangerous places in London.
Of the 33,446 crimes reported in 2018, 11,374 cases of these were violent crimes, placing Brent on the list of most dangerous parts of London. While the recent stats regard Brent as one of the most dangerous areas in London, some great places can be found there. A few examples of these are;

If you are visiting these areas, the travel routes are direct, and you shouldn’t need to worry too much about being the victim of crime.

Croydon, like most London boroughs, is dangerous due to gang-related problems. Youth violence, with record-high knife crimes, is a major problem in Croydon. There were 33,410 reported crimes in the whole of 2018. It previously ranked among the worst boroughs in London, of the knife crimes. Like the other areas in this list, Croydon has its fair share of interesting things to do and see, such as;

Admittedly, Croydon is a dangerous place in London, but if you keep yourself to yourself, you should be fine when visiting this historic borough.

Hackney is an Inner London borough which consists of East London and North London. According to a University of Westminster research, Hackney was the second most dangerous place to be a pedestrian in London. The high rate of crime in this London area has witnessed a gradual decline, however. Hopefully, there will be lesser offences after a total of 33,381 crimes in the last year. The major crimes are theft and handling, which makes this London borough dangerous. The decline may well be attributed to the growing popularity of Shoreditch and Hoxton for trendy partygoers and hipsters.

Some of Hackney’s places of interest are;

Data and statistic suggest that London is a dangerous place, but it is essential to bear in mind the sheer size of this vast city. Cities across the world experience their fair share of crime, so do not let the numbers put you off. London is a city that must be experienced if you get the opportunity, but as with any break, remaining vigilant and conscious of your surroundings is sure to keep you safe!