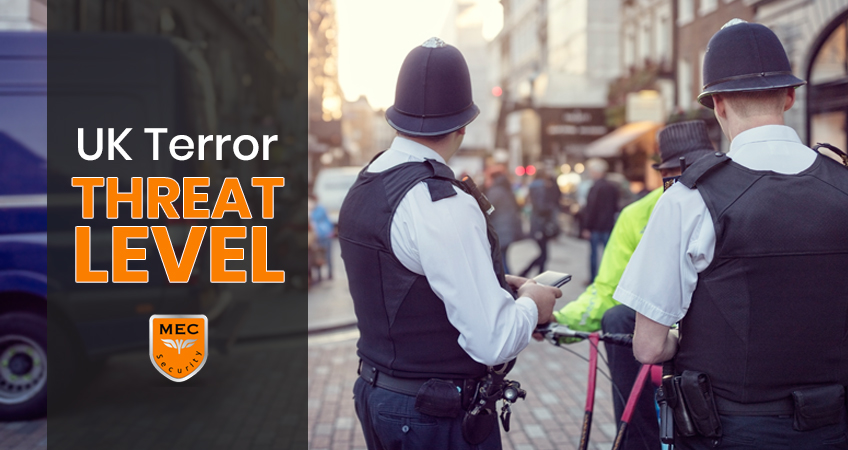 Threat levels in the United Kingdom are a series of different alert states. They are set by the British Government and warn of the current UK terror threat.

In this guide, we’ll look at the UK threat levels and what they mean.

Regardless of the current national terror level, it is essential that everyone remain vigilant at all times. Sharing the national threat level with the general public will ensure everyone remains informed. It lets people know what security measures may be in place, and they can expect within their daily lives. For example, a rise in the current threat levels may mean an increase in security checks in the airport or heightened security activity in public places.

The current threat level in the United Kingdom (England, Wales, Scotland, and Northern Ireland) is severe as of the 3/11/20. This means that an attack is highly likely. The previous national threat level had been in place since 4 November 2019.

What are threat levels?

Threat levels are a series of alert states. They are set by the UK government, and they warn of the current terror threat level in the UK. The current system has been used since August 2006, and the threat level is reviewed periodically.

How are threat levels measured?

There are five different threat levels.

In order to decide on the right threat level for any circumstance, a number of different factors need to be considered. These include:

Available Intelligence: When making a judgement about a particular threat, a wide variety of information will be used. This may be fragmented and include information about the level and the nature of any current terrorist activity. There may be comparisons with things that have happened in other countries and prior attacks. The intelligence will only ever provide an element of the true picture.

Terrorist Capabilities: When making assessments of what is known about the capabilities of terrorist groups, it may be possible to look at previous attacks and from intelligence. This would give security forces an idea of the potential size of the attack.

Terrorist Intentions: This uses intelligence and information that is publicly available to try to examine the aims of the organization that poses a threat. This will also look at what sort of targets they might be targeting as well as the ways that they may achieve their aims.

Timescale: The threat level that the country is at will be based on the chances of an attack in the near future. From past incidents, intelligence officials know that some attacks can take several years to plan, while others may take much less time. If there is no specific information to base a judgement on, it will be necessary to make an assumption about how likely an attack may be to happen sooner. Threat levels do not have an expiry date; however, they are reviewed frequently to ensure that they are accurate for the moment.

UK threat levels have been in use since 1 August 2006. They were brought into place by the British Government and are used to warn of terrorist activity.

Since 2006 there have been some changes to the way that the threat level is conveyed. From 2010, the threat levels for Northern Ireland related terrorism were also made available.

In July 2019, there were changes made to the terrorism threat level system; this was to reflect the threat from all types of terrorism, regardless of their ideology. The threat level now incorporates threats from all forms of terrorist activity, be that Northern Ireland, Islamist, right-wing, or left-wing terrorism.

Since the UK threat levels were introduced in 2006, the current threat level has always been between substantial and critical. The majority of the time, it has been held at severe.

Prior to the current UK terror threat levels coming into place in 2006, there was a system in place called BIKINI state, which was previously used by the Ministry of Defence to warn of threats such as terrorism, war, or civil disorder.

The BIKINI state used a colour code to signify threat levels. These included:

White: This means that there is no information about any specific threats. A white threat level would also mean that the situation is stable.
Black: If the level was black, it meant that an assessment had been made, and there was a possibility of an attack. However, there was no defined target. It could also be used to signify that there was civil unrest and that safety could not be guaranteed.
Black Special: With black special, there is an increased likelihood of an attack. There is still no defined target. This threat level can also mean that there is a potential terror threat.
Amber: When there was specific information received, and there was a substantial threat to government targets, the threat level was set to amber. This was considered ‘high alert’; this could have been a transition to war.
Red: A red alert meant that there had been information received about an attack on specific targets. It could also mean that the United Kingdom was at war, particularly if there was a chance of a nuclear strike.